Wedding cakes are a pretty big deal in Italy. And not just because they appear in most of the wedding photos!

This pic is of my parents at their wedding in the 60s with the all-important cake. 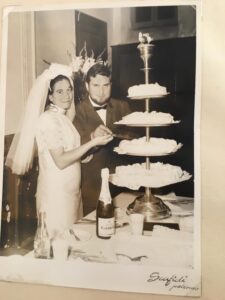 Debora’s parents with their wedding cake

The wedding cake was invented by the Romans

The history of the wedding cake dates all the way back to the Roman Empire –  after the wedding ceremony, a loaf of bread was broken directly over the bride’s head and then passed around to the other guests. This symbolised the sharing of happiness and fortune and was an important part of the day.

In Roman times, the bread would have been made from wheat, which was the food of fertility. This tradition was brought to Britain by Julius Caeser but has transformed over the centuries.

The bread became sweeter and sweeter over time. Raisins and sweet red wine were added first. Next, pine nuts and pomegranate seeds found their way into the mix – yet more symbols of fertility.

In the 18th Century, the French introduced icing to the traditional wedding cake and it started to resemble the cakes we see today.

Italians still like to keep their wedding cakes a little different from the traditional English and American-style cakes. If they’re iced, it’s generally plain. In fact, most Italian wedding cakes stay closer to the Roman tradition, keeping it simple.

They are usually BIG, to feed everyone in attendance (typically there are a lot of guests). But often they are only one very large, flat tier. 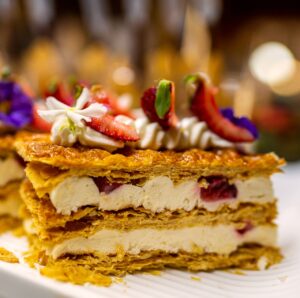 If you’re planning a wedding and not sure how you want your cake to be, check out our tips on how to choose a wedding cake here.

This site uses Akismet to reduce spam. Learn how your comment data is processed.