Travel and food go hand in hand, so while we still can’t travel, we’re thinking about the food we can eat to remind us of Italy.  And if there’s one thing Italians know how to do well, it’s dessert (of course, we may be biased).

These 5 popular Italian Desserts all have a story to tell. Sit back and grab a slice as we take you on a little tour of Italy!

We’re offering dessert Number 5 as a limited offer for Easter – keep scrolling for the link to place your pastiera order.

Tartufo is a gelato-based dessert that originated in the southern Italian region of Calabria at a 19th Century wedding. A lack of cups to serve dessert forced the chefs to get creative and they produced a frozen chocolate shell to contain the two flavours of gelato. 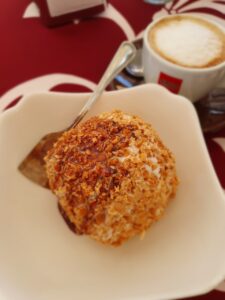 Word spread around this tiny village and they grew in popularity – these small chocolatey bombs are still perfect for impressing dinner guests!

Traditional Tartufo has a fruit syrup centre at its core, and the gelato is then coated with chocolate or nuts. Now you can find all kinds of flavours and coatings but the original is the best in our opinion.

Fun fact – Tartufo means Truffle, a reference to the shape and colour of this dessert 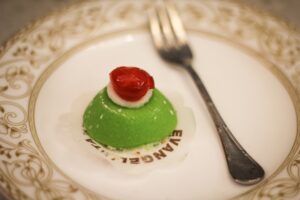 Cassata is lavish and loud, its vibrant green colour making it hard to miss on the shelf of the pasticceria! This unique cake combines Sicilian ingredients, such as citrus fruits, ricotta and almonds – layered sponge is sandwiched with ricotta and combined with chocolate chips, then covered with marzipan, icing and candied fruits.

Not everyone agrees on the story behind Cassata, some saying it was created by Arabs during the 10th Century when they occupied Sicily. There is however evidence that the nuns used to bake Cassata in the monastery during the 16th Century and it was eventually banned to encourage more time for prayer. Now it’s a staple Sicilian dessert and especially popular during Easter time.

Schiacciata Fiorentina is a typical carnival dessert in Florence. This light cake is a simple but delicious sponge, made using the same ingredients as panini but with the addition of cacao, orange and powdered sugar to make it much sweeter. The cake shouldn’t ever be more than 3cm deep and it’s usually finished with a cocoa powder fleur-de-lis for decoration.

Schiacciata was traditionally baked by nuns in the Murate convent in Via Ghibellina throughout the 18th Century. The monastery was eventually converted into a prison but the cake remained as one of the desserts served to prisoners given the death sentence. 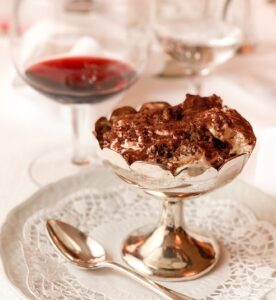 No list of traditional Italian desserts would be complete without mentioning Tiramisù. This well-known pudding blends coffee, cocoa and sweet mascarpone, making it the perfect choice for an after-dinner energy boost! (The name Tiramisù literally translates as “pick me up” in the local dialect.)

The origins of this Italian favourite are not confirmed but many agree that it started life in Treviso near Venice. Regardless of its history, it has become such an important staple of Italian culture that there is an organisation dedicated to ‘transmitting the culture of tiramisù’.

Pastiera is a traditional cake made in Naples. In the traditional recipe, a shortcrust pastry case is filled with ricotta, cooked wheat and candied orange peel, flavoured with orange water. As with most desserts, there is a big dispute over the best way to do things (often Mum’s way is the best!) 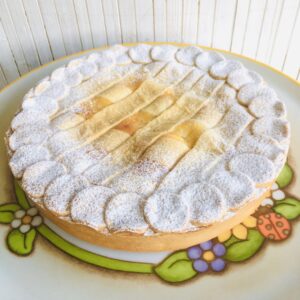 Pastiera is thought to have been created for the Pagan celebrations of springtime. Now it is traditionally eaten at Easter.

We know we can’t compete with Mum’s recipe but after such great feedback last year, we are offering Pastiera again this coming Easter. Order yours here.

This site uses Akismet to reduce spam. Learn how your comment data is processed.